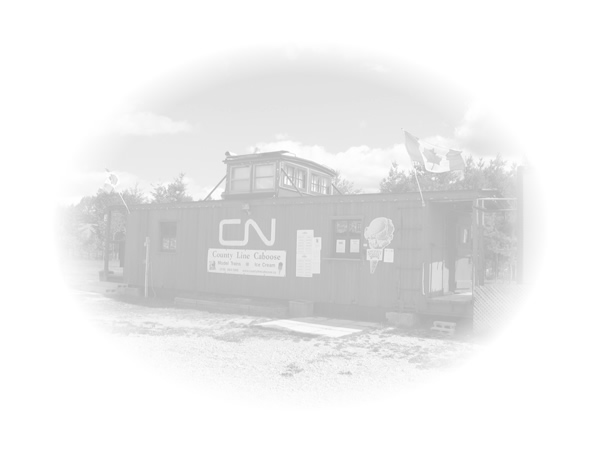 Take a trip on the County Line Caboose

ELMWOOD -- Just off Highway 10, about a mile and a half before Elmwood, is a unique model train set and ice cream store housed in a vintage, red caboose.

County Line Caboose opened in May with the sale of ice cream to Thanksgiving, and diversified to crafts and model trains on September 1st.

Owners, Jeff Leith and Carol Allen, came up with the idea of running a joint business while they were attending Georgian College a couple years ago.

"We used to drive back and forth to school.  Jeff said he was going to school because he wanted to start his own model train business.  I had the location and a friend of the family found the caboose," Allen explains, who lives with her father, Don Allen, on the lot adjacent to the caboose.

Allen says the people have welcomed the store so far and believe they are getting good value for their money on the ice cream end.

Leith says they are both willing to cater to the customer.

"We sell model trains and accessories and if we don't have something, we can get it in," he says.  "Little people, little cars, anything you want for your model train."

Leith's goal to open a model train store is one he's had most of his life.

"I've loved trains ever since I was three.  I think I was born with an engineer's hat," he says.

Both partners agree their store appeals to a bigger market than people realize.

"Yesterday, I had people in wanting to find their kids a hobby," Allen explains.  "We make sure everything is compatible.  You can expand the train set with sceneries, trees.  You may start out with a simple train set and end up with a basement full."

The clientele is mostly male for train sets, but includes people of all ages, including those who are retired and looking for something to keep them busy.  To appeal to women, the store also features crafts from knitted goods to gift baskets, painted saws, figurines and wood working.  Some crafts are made by Allen and others are on consignment from local artists and craftspeople.

"We're always looking for anybody with crafts to sell on consignment," Allen says.  "And if you're looking for a particular craft, a lot of time we know people [who can do those crafts]."

The owners are planning to place a permanent sign on the roadside, but not one painted on the caboose.

"We want to keep [the caboose] original.  It's a piece of history," Leith explains.  "It was on Highway 9 between Walkerton and Mildmay and was built in 1915.  It's in real good shape for being that old."

Both Leith and Allen are enjoying the freedom of running their own business and meeting interesting people.  They are also thankful to Don Allen for his contribution with restoring the caboose and being available to help customers after hours.

Leith says a starter model train set runs at about $100 to $125 and that gift certificates are available for any amount.

"It's something to do in your spare time.  It's fun," he says.  "You get to use your creative abilities because you don't have to follow a specific prototype.  You can plan your own."

Story originally appeared on Monday, 11-Dec-1995, in the "Saugeen Business" section of The Saugeen City News.

*Hours of operation, prices, and other details may no longer be the same.